I caught it again this year, as we slipped our mooring in Willemsoord, Den Helder, and headed out for Den Helder lock and the open sea; that leaving feeling. It must be similar to what seafarers felt in the old days, pre-globalization and pre-internet, when leaving for an eight month’s voyage meant likely no news from home for the whole trip, no contact with the familiar ways and people and places. It’s like the wind over the ocean, that feeling, bracing and exhilerating and a little bit frightening. Awe-inspiring. It’s knowing that you don’t know what’s about to happen, but knowing that you’ll do your best to face it bravely. It’s like the moment before you jump from a high place into water. You take your courage as you find it and leap with all your heart, because a half-hearted leap is only a stumble.

Unlike those old sailors, I will have news from my friends and family for the next eight months, I will exchange emails and pictures and phone calls, keep up with what’s going on in my hometown, what changes and what remains the same. But I have cast off my lines from my land life, and headed out into the unknown, under bright stars and sun, through foggy days and rain-filled nights. I go with my whole heart, I hope, and all my courage, and whatever new horizon tomorrow brings I will keep my eyes as open as I can to see it. The lines are off. The ship is free. Who can say what will happen next?

Sail along with the Tres Hombres from rum destination to rum destination. Taste the delicious Tres Hombres Rum before it arrives in Europe next summer.
Cross the ocean and enjoy the wildlife of the Atlantic Ocean.
Jump into this great adventure … a once in a lifetime experience!
Sign on: 16th of December in Santa Cruz de la Palma to Barbados, 2460nm. Only two spots available for the quick decision makers.
For more info: http://fairtransport.eu/sail-along/ or email booking@fairtransport.nl

The Focsle, is the second most forward space below decks. In front of the focsle there is still the forepeak. These two areas are divided by the collision bulkhead, which has a steel watertight hatch to go from one to the other. Traditionally the focsle is the crew quarters where the hands before the mast live. On board Tres Hombres, this is the case as well. There are eight bunks. Seven of them are currently inhabited, the eight one is filled up with cargo, 70kg bags of cacao, which did not fit in the cargo hold. Aft of the focsle is the drystores, where most of the food is kept. Sometimes, especially in long ocean crossings, part of the stores of the drystores are stored in the focsle as well. The focsle can be reached through the drystores or from a hatch with a small ladder from deck.

The name focsle, focsel, or foxhole comes from the original fore-castle. The fore-castle was a castle like building on the foredeck of medieval ships. These ships also carried an aft-castle which later developed into the poopdeck. Since I live in the aft-cabin myself, the focsle, on board Tres Hombres, stays a bit of a mythical place for me. I have heard a lot about it of course, but seldom slept there. I did start my sailing career in different other focsles, on other ships. For sure it is the part of the ship, with the most movement, since it is all the way forward. Also, again since it is so far forward, it is the place where the most spray comes over. And as Tres Hombres is a wooden ship, with caulked seams, especially after the burning sun of the tropics, and the beating of the waves of sailing against the trades, it can not be called a really dry place either.

But then, although it can be a though place to live, for some it is also seen as a badge of honor, to start life on a squarerigger in the focsle. I remember a few years ago, one of our trainees, refusing a bunk in the aft-cabin, after this came vacant and I offered it to him. He would almost be offended, no I am a focsle hand, so I stay before the mast! In the old days there was the saying: coming through the hawse pipes, or through the portholes. Through the hawsepipes meant, starting as a focsle hand, so working yourself up from the ground. Through the portholes, would mean starting in the more prestigious rank of an apprentice, living in the cabin, without ever enduring the hardships of the focsle. Fortunately, signing on as a trainee on Tres Hombres, you have a good chance to start in the focsle, so, welcome on board! 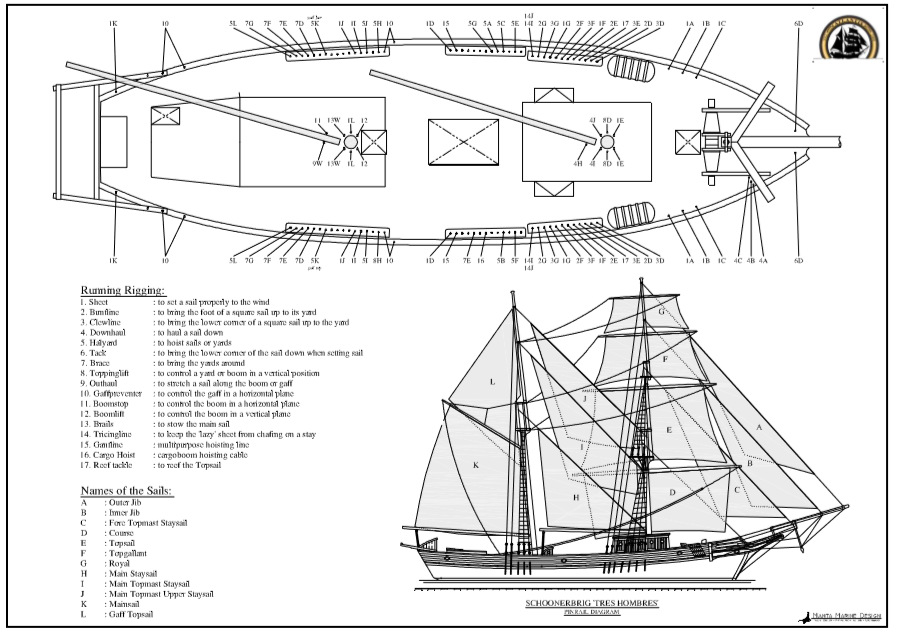 Tres Hombres blog: 15 humans, a giraffe and a sheep are going to St Martin…

When we arrived near La Palma after 5 days of fast sailing the sea was remembering 20 knots of steady wind a bit choppy. We hove to a couple of hours to prepare the ship to be moored in port, we’ve seen the dance of cruise ships and ferry going out. At 17h00, quite hidden by the pier we dropped stern and bow anchor to stay 5 m away from the quay for 2 days.
We were glad to spend the first evening together on board. The sprays against the quay wall due to the rest of the swell was touching the course yard. Well, we ran the dinghy and the next days had to move the ship 3 times because cargo, cruise ships and ferries are much bigger than us. Nice maneuvers at night on our own or with the pilot boat. We slowly made friends again because 5 years ago a cleat on their deck broke when they towed us, since that they were not open to work together. Captain Remi did a lot of communication to arrange all facilities and make a nice connection because he is just a simple appreciative and competent seaman.

Life on board was sweet for all of us. 14 barrels of precious rum have been loaded and stored for 7 month at sea. For that we had to move cans and cans of animals food on top and take good care of soft tins and bags.
The crew visited the rum distillery, bananas cultures, a little farm, forests and went to restaurants for local food. Also 2 hammocks are full of green bananas in the cargo hold and the drystore shows a firework of colors.

Now at sea, Canary Islands at our back, the new trainees discovering the entire clear starie sky like never before and the bio luminescence in the water when Tres Hombres is cutting the salt water fluid. And then seriously, Eye of the Wind left Tenerife the same day as us,so let’s trim the sails and play with the ship.

To me, after many years as a sailor, I realized that I don’t get used to leaving good friends on land. They set in me a sort of balance in my heart and in my mind. It’s what the life at sea is building, stories to share, emotions to share, know ledges and feedback.
Departure, to say goodbye are essential. This splits my heart, but I know I will meet you later with more sincere love.
You, sailors bloody men that I met in last few years in many places on planet Earth, Mother nature still brings my body and my soul over the oceans and you are a part of myself, print in my blue blood gene. Sailing with you on my shoulder like angels. Thankfull for that what I learned and given the freedom of doing and growing in confidence.

Good bye Captain Remi, respect and good luck for the lovely weather in Netherlands. For the school, here we know already your ability to manage a ship and crew. We are doubtful of your talent particularly in making lists!(the crew is going to hate me )
Welcome to the new Captain Fabian who is sharing his knowledge of cargo on board Kwai and others, also his happiness.
Goodbye Ewan and welcome Alan (born the same day) who have swapped on deckhand position a couple of times without meeting each other before La Palma.
Welcome trainees who came aboard with open and shiny eyes.
I don’t forget crew and trainees who have been aboard since Den Helder¦ JUST AWESOME !

..15 humans, a giraffe and a sheep are going to St Martin.

PS: We went to Brixham instead of Douarnenez, later we went to Porto instead of Madeira but don’t worry about St Martin…