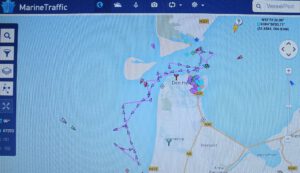 On Tres hombres we often say ´wij varen het water dun, which translates as ´we sail the water thin´ which is a way of sailing that we never stop sailing. This means we are not often in Den Helder, the ships headquarters. But this weeks visit to Den Helder was briefer than usual!

Due to the pressing schedule and the need to drop off some shipmates we made a whistlestop visit, picking up some extra provisions along the way. To get into the port we had to make a series of shot tacks. There is nothing like showing off to the home crowd how Tres Hombres can point (beat against the wind) as we tacked up the Schulpengard and along the white sandy beaches into the harbour. Under full sail in a building force 6 she must have been a magnificent site from the shore. 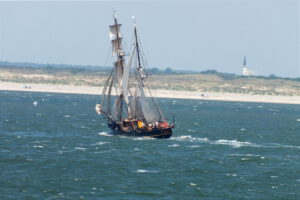 As the winds were too strong to anchor, we hove to (braced the yards against the wind to stop). Then a launch boat with a coffee and chocolate cargo destined for a festival in Rostock, plus our provisions, came along side. We quickly said our goodbyes to departing shipmates Louise and Tim while in less than 10 minutes we exchanged them for cargo. And on the shift of the tide we set the sails to run out of the harbour once more.

Later that evening we watched as the sun set on our port side and rejoiced at the forecast of a few days of good winds and sunshine.

Rostock and Copenhagen here we come!