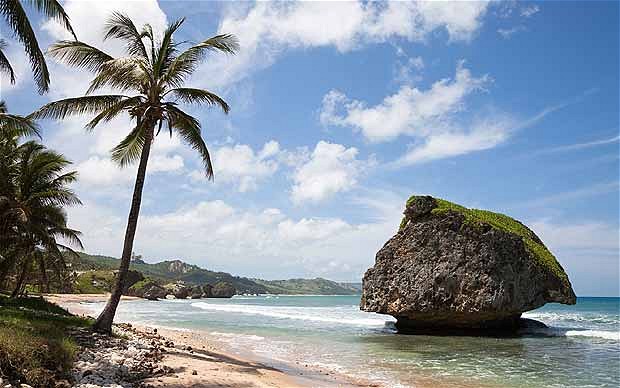 We spend about a week in Barbados enjoying the island at the most. All of us crew and trainees had a chance to see the island with our Dutch and very well spoken German tour guide Jules who also acts like a agent on Barbados. From natural swimming pools to Dutch windmills to Mahogany forests to Coconut Palm beaches with sunset.

Barbados is compared to many other Caribbean windward islands very western. You can find shops and stores about anything you need. Off course fast food too. And many tourist that are visiting by cruise ships. Snorkeling with turtles just of the beach was for many a highlight.
In Barbados we had to say goodbye to a fellow crew member and two trainees who became during their stay onboard very much part of the family. I am sure we meet again!

As we had some more time to spend before calling Grenada to pick up chocolate on the 11th of February.We decided to go islandhopping in the Grenadines. After a day sailing downwind we reached Bequia the most Northern island. In Admiral Bay we anchored on good holding ground. As we arrived in the night we woke up to find ourself being in paradise.White beaches and green hills and turquoise waters. We where lucky, a blues festival was going on. Locals played a mix between reggae, blues and R&B.

Some of us went to see turtles on the windward side or went snorkeling. Others stayed in town for a relaxing afternoon. After the weekend we left on Monday in the afternoon to sail by sunset towards the island Mayreau, a very small island with good anchorage in Salina bay. Here again we woke up in paradise and enjoyed the day laying on the beach, snorkeling and drinking a local beer. At sunset some of us found the place of Dennis Hideaway and went to eat at his place. For next year we have some wine and olive oil to bring. The next morning we had a hour sail to Union island where we anchored in Chatham Bay. Now we sailed into paradise during daylight. A white sandy bay surrounded by little shacks of food and drinks.

The next morning we sailed to Carriacou again a one hour sail. But understand before setting sail we have to raise anchor. At times we have 3 shackles out in the water. This is about 75 meters of anchor chain. This chain needs to get back on board using elbow steam for our up and down windlass.

So everyday the crew and trainees had a nice workout after breakfast getting the chain in and hoisting sails. Reaching Carriacou, we had to tack into the bay meaning helm a lee, tack the fore and aft sail and let go and haul the braces.Our trainees by now starting to understand where all the lines are for and know how to work them. We dropped anchor again in paradise. We decided to stay for the weekend and explored the island again.

Here in Carriacou they still build traditional wooden boats a skill that was about to disappear on the island. But luckily father boatbuilder had been teaching his suns the trade. Some of these boats are still hauling cargo at times under sail. Check the internet on ´Vanishing sail´. We had a nice barbecue onboard on Saturday night roasting fish and Lambi and for some of us real meat.

Sunday we all went snorkeling of the reef of Sandy island. Swimming in a aquarium it was! Setting sail by sunset heading for Pirate Bay on Tobego. Again sailing into paradise.