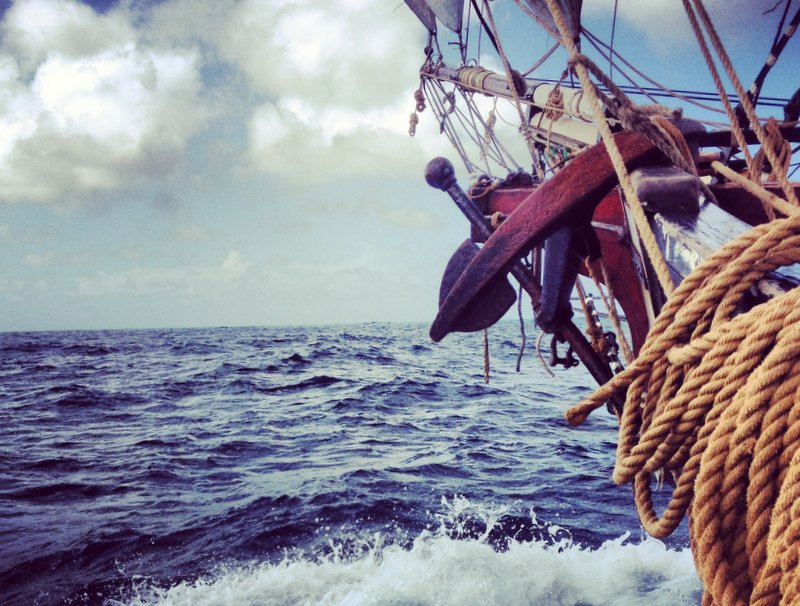 Hands to the anchorwinch! The deckhands move to the foredeck while the mate is giving orders. The claw on the chain is taken off, and on both sides of the pump windlass two sailors take their places. Somebody keeps the chain under tension to the aft and, another deckhand is sitting next to the galley to feed the chain down to the chain locker were again, one of our hands is stationed to flake the chain. The anchorwinch starts moving by the age old energy form, of Norwegian (elbow) steam. The monotone sound of the pawls is the only sound you can hear. The power; the anchor, anchorchain and winch is putting upon the ship is felt everywhere in the form of a silent vibration.

There are 2 and a half from our 4 schackles ( a shackle is 27 meter) of chain out. The ship has been anchored  here for two weeks, in 10 meter deep water. Not the best holding ground, fine sand, she has dragged around a little but lately, assisted by this sufficient amount of chain she has been holding well. Now each time a shackle comes up the mate communicates  it aft. When the chain is almost up and down, the order is given to set the foretopmast staysail. The sheet and sail is held aback over portside to push the bow, gently, to starboard, while the hands heave in the last meters of chain. Now the mainstaysail is set. While the bow falls off further we start moving in a forward direction. We are sailing now!

While the anchor is still hanging partly below the waterline, the command is given: hands to the braces, brace to port tack. This means the yards, who where braced over portside, called starboard tack, will now be braced to the other side. So the wind can actually catch the sails. Now the sail configuration of our good ship changes rapidly. The topsail is set, followed by the topgallant and royal. Now the starboard watch is setting the other main staysails, and the portside watch hoists the jibs. To complement the picture the course and mainsail are set with the whole crew.

While the sun is setting on our starboard bow, we are leaving Cabo Rojo, bound for Boca Chica. A gentle swell and beautifull starry night accompanies us out to sea…