A bloody seagull on a soapbox can sail downwind, but it takes a seaman to go against it. 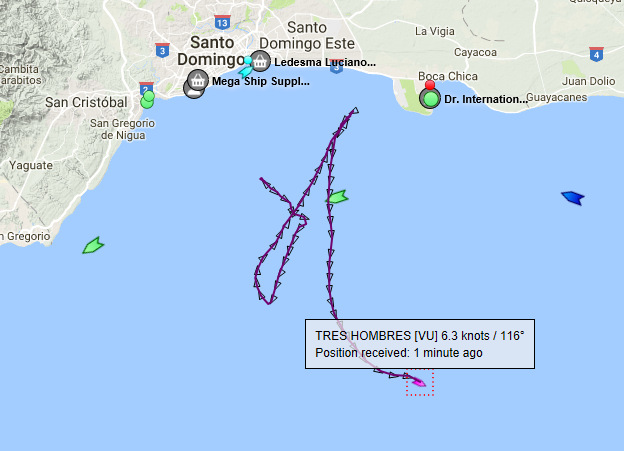 Tacking against the trades,

Since leaving the anchorage of Cabo Rojo, we have been close hauled. A term, used by sailors when sailing as much against the wind as physically possible. It is also the course where the qualities of the sailor and his vessel are most tested, independently of the strength of the wind. In the Caribbean sea, when one is intended to move from West to East, there is no other way than going against the prevailing trade winds.

The voyage, before I came on board, which departed after loading coffee in Santa Martha, Colombia, and brought the ship to Cabo Rojo, Dominican Republic, was a good example of a close hauled voyage with strong winds. This is really where crew and ship are tested to the limit. Before leaving Santa Martha, the whole standing rigging was tuned as taut, that she was able to carry sail to the utmost. And this is what she did, and this is what had to be done. Because only with fighting over every degree and mile, it is possible to make headway against the trade winds and their accompanying currents. Especially when they are stronger than average. It has a prize though, a wooden ship pushed this hard, has a tendency of leaking more than in less challenging circumstances. Her crew becomes tired after days of fighting the adverse weather, having not a dry rag left, and being tossed around the decks and cabins.

This trip, to Boca Chica, we encounter a total different situation. Quite the opposite in weather really, the wind has not been very strong and at times even absent. At these occasions there is barely enough wind, to even steer the ship in a straight course. And as we have to tack almost every watch, to fulfill our intended zig zag course against the wind. We had it two times now, that we were not even able to tack her, due to the absent push in the sails, combined with a swell to stop her bow. If this happened, stubbornly we would, make speed again and steer into another tack, to only experience the same disappointment. And finally after having encountered the failed slow motion maneuver twice, we would finally retreat to the even more ground loosing maneuver of jibing. Also sailing with these light winds, would not be so much of a challenge, where it not for the constant strain of the current setting us West, and at our slow speed, making our zig zag course often not more than a parallel track.

Our voyage plan positively stated a voyage of 125 miles, yet we logged already well over 300 miles since heaving up anchor. These miles are not won, with a nice racing speed, no, we are averaging a speed of: 3 or 4 knots an hour. Our crew is in high spirits though. We are looking forward to fasten our mooring lines in Boca Chica. Meet up with the new crew members, who are awaiting our arrival, to join our ranks. And finally start loading the final precious cargo, cocoa, rum and melasse, up till her marks, to return home across the North Atlantic ocean.

So even these days the age old saying holds true: A bloody seagull on a soapbox can sail downwind, but it takes a seaman to go against it.