GENERAL SYNOPSIS: ON BOARD THE TRES HOMBRES

Penn is the Breton word for head, so Penn Sardine means sardine-head and the people of Douarnenez are proud to be called so, because of the historical importance of the sardine fishing and canning. The sardines left, but the name stayed. Douarnenez is already out of sight for a few days, but not out of mind and heart.
In many ways our stay there was a good one. Of course for the cargo: the unloading of the Exeter ale (beer) and the loading of ten 220 l. barrels of young wine to be aged on board the Tres Hombres.
There was a lot of public interest and from the put alress. To some people we owe our special thanks. In the first place Guillaume Le Grand and Diana Mesa of TOWT, who made the press attention happen, were a party in the cargo handling but also available to help out whenever necessary. Together with the Port-Musée they organized the round table meeting on sailing cargo. We worked together in a good and cooperative atmosphere. 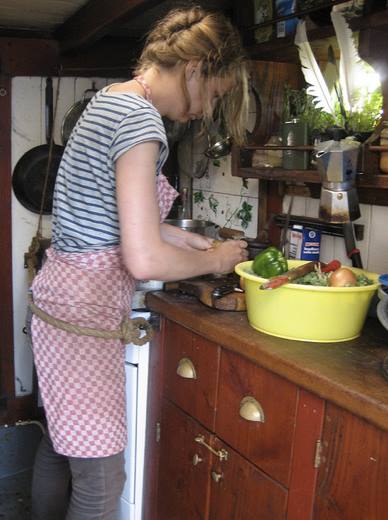 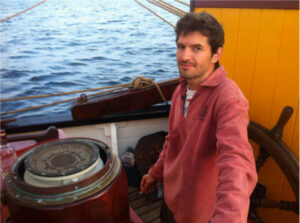 Rianne : Bar(re)Tribord was our living room during our stay in Port Rhu. The first evening all the crew left to a bar while dinner was still being prepared on board. A few hours later the cook had to go looking for her goats and figured the first accessible bar would be the most likely one to find them. And what a nice tavern it turned out to be! The owners Olivier and Pascal were very welcoming to the then slightly agitated cook and told here they would be more then happy to accommodate for dinner to be served at the tavern. Assuming this would be a one time favor, to my surprise the next day Olivier insisted on preparing crabs for lunch and arranged a copious amount of these crawling creatures to be delivered at the ship. Following were three man firmly ad vicing me how  to cook, cut, eat and enjoy the crabs. And what a feast it was! All in the welcoming atmosphere of Barre Tribord. Olivier preferred for the crew to fill up his tavern and sometimes even closed it from other visitors (´they just distract me from you guys´).

I felt inspired to make the best of this generous hospitality and I served the following dishes with great pleasure accompanied by Herman (Jappapppa!) on the accordion, and Captain Boogie on the piano, that had to be unloaded from the cargohold. Every evening in Dournanez became a warm familiar gathering with lots of laughter, singing and good conversations.

I also enjoyed my fare share of sardines in tomato sauce in honour of my father- who just turned 65 -for he teached me as a child that canned sardines are the gastronomic equivalent of a succulent sole prepared on buttery sweet celeriac puree with a tart white wine souce in case all those ingredients are not at hand. And the crepes…. and the butter… and o yes don´t forget the Bigournos (Alikruiken), Rilette de Tete, Crepe Complet, the organic wine from Steven and Valerie (Cháteau le Puy), Rum au Vanille and the very best soft and crispy Eclair from the boulangarie that have changed my life for the better! The Tres Hombres crew indulged themselves in all the best Brittannie had to offer and in return, it seams, she only wanted to give us more. And so we had to leave before we got to fat and lazy.[/two_third_last]