So we left Madeira on the Monday the last week and for me this was also the beginning of my trip on Tres Hombres. I came on board the Sunday before and I was showed around, I moved on my bunk in the forepiek and put all my stuff in my seaman’s chest. On board I learned about that we will have in a smaller step before the big crossover.
On Monday we had a healthy breakfast, prepared the boat for sailing and left Madeira. Well left is maybe the wrong word, cause of bad wind Madeira stayed in our back for a longer time. In the afternoon the captain decided to build the watches and I went on my first watch till eight in the evening, then we had a nice dinner and went to bed. When we got up at midnight for the night watch. We got told that 15 minutes ago finally the wind came up and the Tres Hombres showed her full power.

From now on we were getting into sailor’s daily life with the changes of the watches and short phases of sleep. In the evening of the next day we already had to slow down, so we won’t arrive La Palma in the middle of the night. 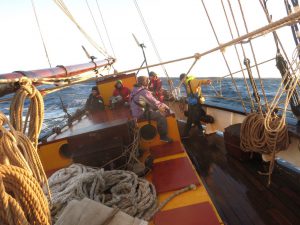 On Monday morning La Palma came closer and closer. Our watch, who was on watch from four to eight, knew that it’s gonna be a long day, then for sailing into the port all woman- and manpower was needed on deck. So we started preparing anything to sail in the port. We put the dingy in the water so our mate and one of the trainees could wait in port. But then the problem started and the engine was broken, so the two had to row the dinghy to the port. Strong-minded and in a good shape they made it and arrived in port at time.
Meanwhile on board of the Tres Hombres we tried if it’s possible to sail, we turned around and arrived successfully in port. Where the two others were waiting to catch the monkey fists. And successfully we arrived in port.
But we were on the wrong place of the quay and so we had to pull the boat to the right place. Where we made her fast and squared the deck. After we all went in town to have a beer and then we had a nice evening on board. The following days we took out the empty barrels and and did some work on the boat to take care of her.
On Saturday we had a really special day. First we visited the rum distillery and later a factory where they roll cigars in a traditional way. But it was not that big kind of a factory, it was more a small house to roll the cigars and a beautiful garden around, where you can find a lot of different vegetables and fruits. So we also spent the evening over there and having a barbeque, smoking cigars and drinking some local wine.

The Plan was to ship the cargo on Monday and leave on Tuesday. So on Sunday already got prepared for the crossover by doing 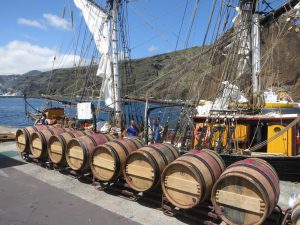 the laundry and taking a shower. But normally nothing comes like it’s planned. On Monday we were able to ship nine barrels of rum. But it seemed impossible to leave on Tuesday, then the wind wasn’t with us. So for the next two days we continued the work on the boat. On Tuesday the captain bought two octopuses, one really big one and a smaller, from some fishermen. Our cook asked to clean them and for the next three days we had some great all different meals with octopus. On Wednesday night we had a really great party on board with good music and a taste of beautiful rum.
Yesterday after the party and because we did a great job the day before, the captain called it Sunday and we all had a last day of before going to the sea. So we had another day for hiking and enjoying the wonderful La Palma – Isla Bonita.
Yesterday we realized that it’s really time for everybody to go at sea and sail across the ocean.