For more than 10 years Tres Hombres is carrying cocoa beans from the Dominican Republic back to Amsterdam.

On Thursday, the 24th of February the Tres crew went on a field trip to the backland of the island to meet the farmers of the cooperative Conacado. The inner backland is the agricultural centre of the country. On the 3 hours bus trip to San Francisco, we saw large plantations of rice and banana passing along the street. The cooperative is a local enterprise that hosts 10.000 cocoa farmers. The annual production is approximately 80.000 tons of cocoa. The small farms are up to a size of 20ha to avoid a monoculture in the area.

Cosme Guerrero, the operational manager, explained the mission of Conacado. Farmers get support from specialists to plant organic cocoa to the highest sustainability standards to increase the crop. They are also shareholders and decision-makers in the annual assembly. This mission results in a higher resilience and independence of the farmer. It also improves the price stability of cocoa and increases the social-political impact of these communities.

Cosme gave us a tour around the modern factory. They produce cocoa powder, oil and butter. In the labs, samples are tested to receive the quality requirement of the licenses. In the factory, the shell of the cocoa bean is separated to be used as a natural fertilizer. In another step, the beans got roasted and ground before becoming the final products. Everything is automated and controlled by computer programs. Solar power is covering 20% of the energy consumption of processing cocoa from 4,2-4,6 Mwh. At the end of our tour, we have got a delicious hot chocolate from their own production. In exchange, we brought some of the chocolate that gets produced in Amsterdam with their beans.

After a local meal with local food, we drove to the village Comedero to visit one of the plantations of organic cocoa. First, the cocoa beans are fermented for 6 days, the process of fermentation increases the flavour of the cocoa. Many customers, like the Europeans, prefer a stronger cacao flavour. On the site, there are greenhouses to dry the cocoa beans. For eight days the beans have to be dried and turned every 45 min with a wooden rake.

On the plantation, the cocoa trees there are up to 80 years old and grow happily in a humid warm climate. The harvest time is between February and May when the fruits are turning yellow and orange. All fruits are harvested by hand. Manuel, one of the farmers who was showing us the plantation emphasized there is a change due to the global warming effect in the last years. Longer dry periods and longer wet periods put the plants under stress with the result of a lower crop and shorter lifespan.

In the late afternoon, we went back by bus passing picturesque villages and landscapes and arrived at our ship at 8 pm. It was a very inspiring trip for all of us.

We gained a deeper understanding and relationship of the farming and processing of cocoa and we were impressed by the strong social mission of the cooperation Conacado. The next day we received 10 tons of cocoa beans in bags of 70kg for the Chocolate Makers in Amsterdam. Their fermented aroma will guide us on our way back to Amsterdam.

Do you enjoy reading our crew’s adventures? Imagine being there when you enjoy our products at home! 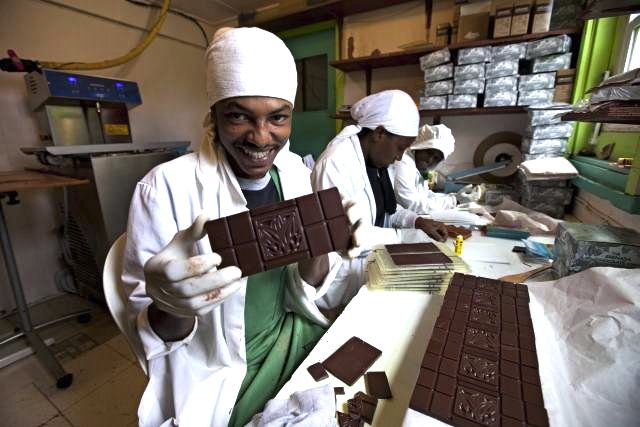