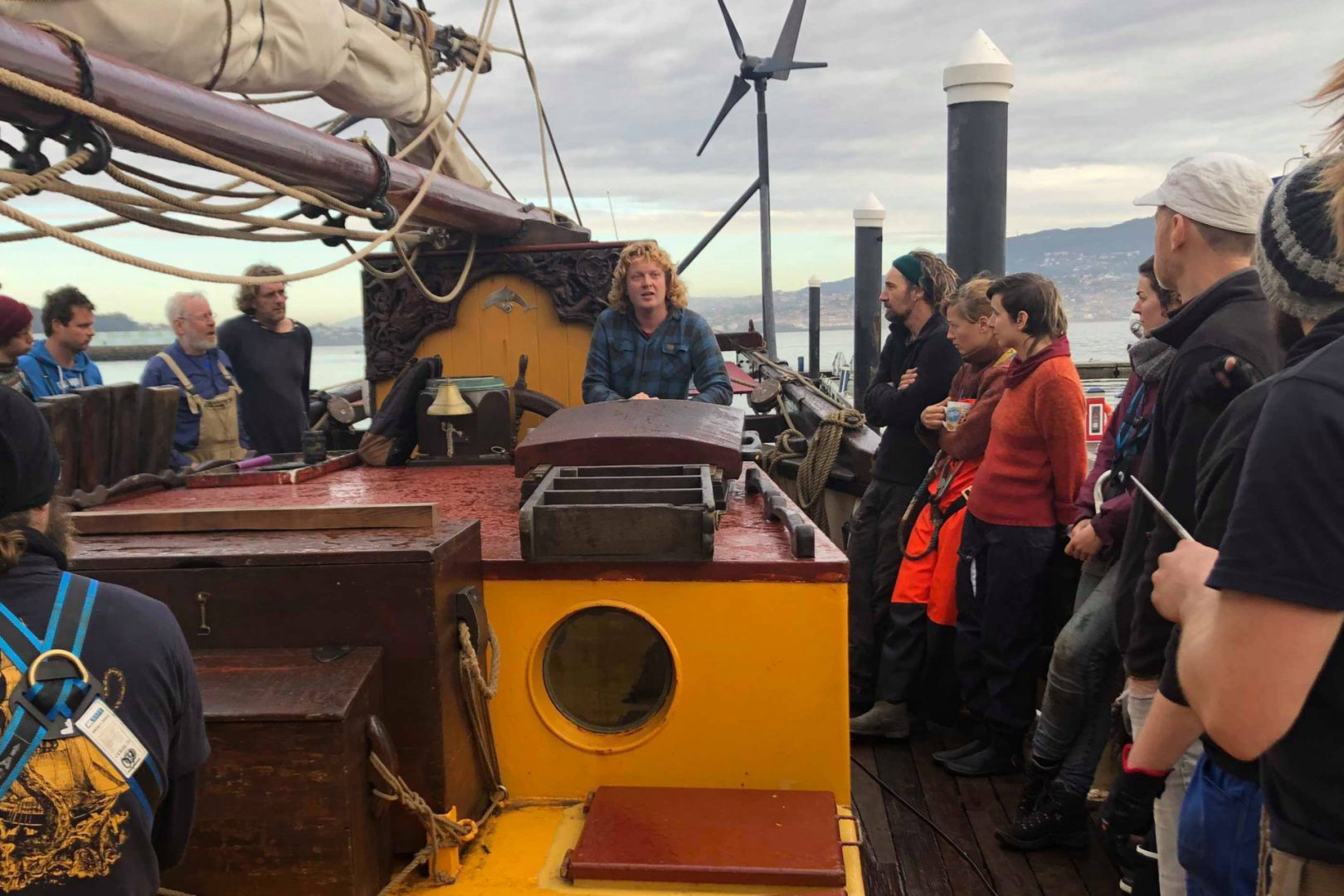 Yesterday the 16th of December we departed from Santa Cruz de la Palma. After loading 11 barrels of rum Aldea, 8 days of work, making the ship ocean ready, enjoying the beautiful island, visiting the Aldea rum distillery (thanks for the nice meal together!), organizing organic food for the crossing and changing trainees it was time to leave.

The life of Suzan and me is really much connected with Fairtransport (sailing around the Atlantic on the Tres Hombres together, married on the Nordlys, planning our life around the voyages on the ocean. I’m really happy Suzan joined me the first part of sailing as a captain on the Tres Hombres), but we also have a life on land: living in a bus and building up an Eco community in Zeeland.

It’s always a strange moment to say goodbye to the ones you sailed with, lived together on this small boat and sharing all these intense moments. The sound of the Norwegian horn and see you in Amsterdam! What makes this moment better are the new interesting people joining the Tres Hombres. We welcomed Jaap, Lars and Lense, who joining us for the ocean crossing.

In the harbor the first thing to do every morning is checking the weather: when is the good moment for departure? First look up into the mast, what is the flag telling you? What are other flags telling you? The smoke from the factories? Then look at the online weather forecast.
Is the ship ready? The cargo sea stowed? When is the provisioning coming? And then again check the weather. Yesterday was the perfect moment: a depression was coming over north of the Canary islands so with the North East winds we could sail out of the harbor of Santa Cruz, using the 24 hours of North East wind to get at least south of El Hiero and wait there till we could pick up the trades and sail further south to the hight of Cape Verde and when we are there: find the good moment to go west.

La Palma is a high mountain island we have to be careful with the winds around the island, even coming from the opposite direction as the weather forecast tells you. Also think about land wind and sea the wind is changing every morning and evening. Don’t only look at the weather forecast on the screens but ask the locals too (fisherman, harbourmaster etc): what do they think?

At 15:30 local time the wind dropped down a moment and this was the moment, with a little push from the dinghy we could come to the East Pier of the harbor, set sails and sail out, sail east, away from the rocks, away from the island away from the waving Marco and Suzan.

Within an hour all sails were set and we were making 9 knots. After a night with a lot of wind shifts around La Palma, La Gomera and
El Hiero (bracing around, bracing around, making in between 4 and 11 knots) and an old swell from the depression up north we are now, in the morning of the 17th, free from the islands: there are no mooring line watches, cruise ships, xmas shops, smell from generators and sounds of cars anymore: for 3 weeks it’s the ocean and us!

All the best from the Tres Hombres, at the moment we are making only 2 knots but we are going south!

We are fully loaded to the brim with Coffee, Rum and Chocolate. Barrels in the noise room, that’s probably a first. With time to think after weeks of harbours and civilization, I am finally writing my 4th blog article on this journey. Returning home I really look forward to seeing my families and friends again […]