Tres Hombres blog: A beautiful maneuver after a great visit of this magic place, Getaria!

What a moment, when we had to call out: let go stern line, let go bowline! All our friends, from whom we have known not one a week ago, were standing on the pier. Ruurd, Jon, Jesus, their families, the mayor of the village, the harbor master, the fishermen who just gave us 4 bonito’s for the voyage and even an official from the Basque government.
But the crew had no time to wave goodbye, as we had to pull the ship off the lee shore with a long rope and giving her some initial speed before setting the squares and making way to the harbor entrance and head out to sea again… a beautiful maneuver after a great visit of this magic place, Getaria!
Special thanks to Ruurd, who had us ordered to this place, in order to load organic Txacoli, a young, fresh wine grown just around here, some cider and a lot of biodynamic bottles from La Rioja and the Douro valleys. He also arranged a fantastic meeting with the wine makers, the crew and the great women of the village, who prepared a meal we will not forget! And that’s how it went on…
In between the loading of the cargo and some maintenance we enjoyed the great weather which came with us, after 6 months of rain here. If there was no party or interview planned, we went to the farmer Jon to plant the Dahlias we brought from Holland, took a swim at the local beach, where the Atlantic rollers would come in smoothly or climb around on a vertical mountain . A seaman’s life can be very hard sometimes.
This port was one of the most welcoming ones we experienced and as a refuge harbor also a suitable one for a ship like ours, coming in and out without help. At arrival, we did not have all lines fast yet, a beautiful lady jumped onboard, asking for an interview with the captain, which he could not refuse at all, while another man made a little film about Tres Hombres throughout the process of harbor furling. A dentist was ready to receive a patient, showers were made available as well as power and water, cider and Txakoli…
We also had the chance of visiting the impressive Albaola shipyard near Donostia, where a replica of a whaling galleon is being build. They might need some crew in future who know how to sail a ship without motor…
Now, back at sea, we await the 5th fish meal in a row, as the precious tuna is being prepared in yet another way by the cook, not wasting a spine of it.
All in all it was a great stay in Getaria and hereabout seaman’s life is worth a break in it, before the wind will blow away all thoughts and dusts of the land again. 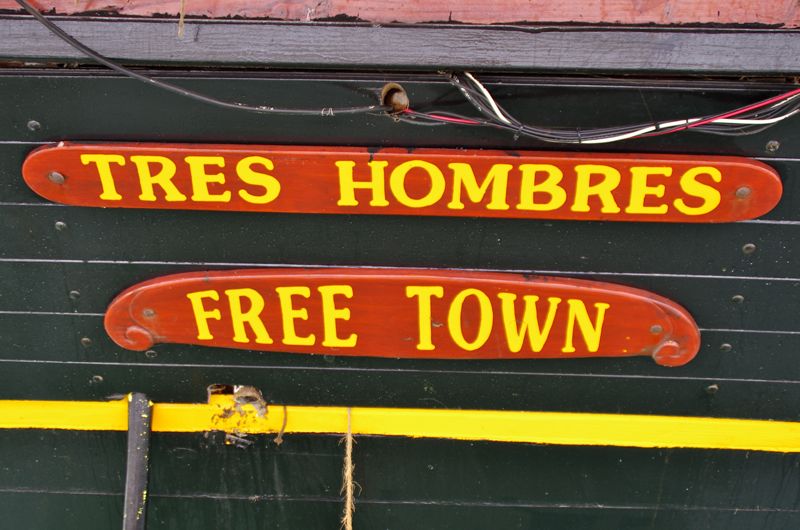